Our school first started as Archangels Montessori Learning Center way back in 1999. It was a one classroom learning center situated at the ground floor of a three-story building. The learning center had a population of 24 pupils.

The elementary and Kindergarten course were both given school recognition by the Department of Education on Nov. 21, 2019 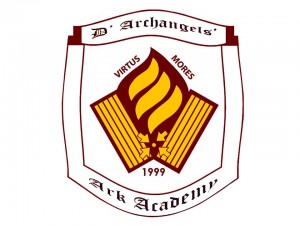 The crest is shaped like a shield of the archangels. At the center, are four arrows pointed to a dot. The four arrows are the four major stakeholders of DAA: The parents, the administrators, the staff, and the pupils. The dot represents the school where all the four key players will collaborate.

The books represent the knowledge the stakeholders will learn and share with each other. The flame is for everybody to keep the ember of excellence burning.

On each side of the crest are the motto: Virtus and Mores. These means Excellence and Morals respectively in which our school highly promotes.